Beta 2 of WinFX was released a couple of weeks ago. Even though I've been quite excited about what Microsoft has been doing with WinFX, I've learn't to stear clear of Microsoft community previews and the beta 1 release. APIs are too volatile, there is little support out on the web for when you run into problems (which you will) and chances are that even when a more stable version does get released something from a previous version will cause problems. CTP Madness indeed.

Strangely, even before I'd managed to install WinFX it ceased to exist. A name changed was announced, with WinFX now a part of .NET. Although there has been much nashing of teeth and rendering of clothing both from the usual suspects and some Microsoft developers, I believe the name change was a good move. One name are one download will be less confusing for users and to most developers. All they need to know is that to run or develop an application they need a specific version of .NET. Having to worry about X version of .NET, Y version of WinFX, plus whatever else comes out in the next couple of years is too much for most and really, 99% of the public don't need to know. One download, one name. KISS.

Back on task; first .NET 3.0 impression: 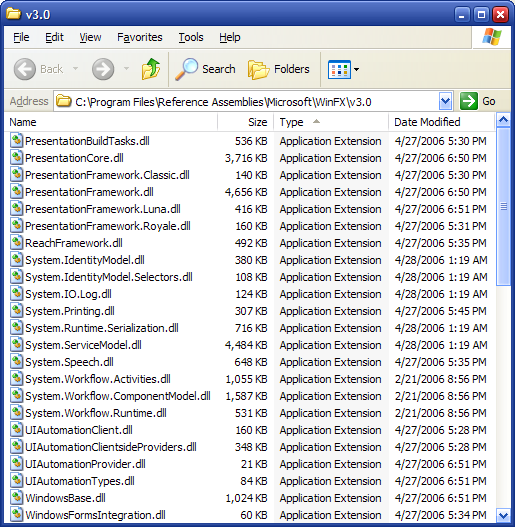 Hmmm, this may take a while.