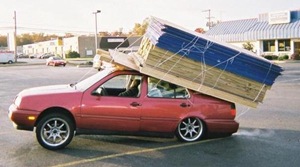 Sometimes you want something working now. Code that is understandable, maintainable, extensible and performant has its place but there are times you need a piece of functionality ASAP. Enter the quick hack.

Below is a quick hack I did recently for a temporary dev tool. This isn't a post showing off a piece of code's elegancy or simplicity. Instead while it functioned perfectly and took no time to do, this code was so judged so unreadable and it performed so badly that I believe the hack deserves some kind recognition anyway.

Take a utility console application and turn it into a Windows Forms app that has a minimal UI.

The console application writes a lot of debug data to the console. I want that information to be visible in the Winform app and so need to display the console output in a text area.

Sure you could abstract away writing to the console through a more generic logging interface and then replace every call to Console.Write, but that is far too smart and time consuming if you ask me [;)]

Instead in the spirit of Quick Hack I chose to set my own TextWriter to Console.Out and have it write to the Winforms textbox.

The TextWriter that will be set to Console.Out. Nothing too outrageous so far...

For the curious what is going on there is a lambda function is being created which takes a char. Because Console.Write is being called from a non UI thread we need to use Control.Invoke. The function creates another lambda function which adds the character to the end of the Winforms textbox. That lambda is called then passed to Invoke to be run.

The icing on the cake is not only is it hard to understand at a glance but its also incredibly slow. For every single character being written to the console the app will:

No wonder it maxed out a CPU core and output got written to the textbox like a type writer.

After showing off how awesomely bad this hack was I did spend a couple of minutes making it usable. Splitting the code up and adding comments made it somewhat understandable and to fix performance all that was needed was an override for TextWriter.Write(char[]) and replacing the string concatenation with TextBox.AppendText.

If you have any quick hacks of your own that you are proud of (both elegant and horrible) I would love to hear them.