The big feature of this release is improved performance. For the first time in a couple of years I’ve sat down and benchmarked, profiled and tuned Json.NET. 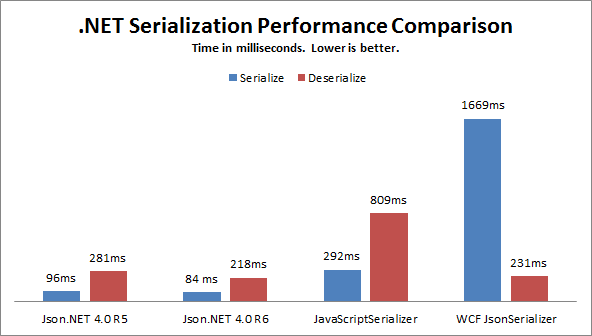 For all its features Json.NET was already fast but there are improvements in JsonTextReader which I rewrote and object deserilization. Json.NET is faster than both .NET framework JSON serializers in all scenarios again.

One of the nice features of JsonTextReader is that it keeps track of its current line number and line position and includes that information when it encounters bad JSON.

Visual Studio Ultimate Edition has a feature called Intellitrace. Intellitrace and Json.NET didn’t get along. After a year of at first being unsure why only some people were getting the error, and then not knowing what exactly why Intellitrace was breaking Json.NET, I finally nailed it down to one three line method that Intellitrace didn’t like. Fixed... finally.

Here is a complete list of what has changed since Json.NET 4.0 Release 4 (if you’re curious where v5 is, it was just one fix for Windows Phone Mango and NuGet).